1st day Arriving from Milazzo to Lipari by boat shuttle, transfer at the hotel with dinner and overnight.

2 nd Day in the morning starting to know the history of the archipelago with the archeology  museum in Lipari which is one of the most interesting in the Mediterranean, there are countless vestiges of the history of the island and the successive stratifications, as in a gigantic palimpsest of a period of 5000 years perfectly legible in the open diggings among the imposing walls with bastions. In the afternoon stroll in the lively and picturesque town, dominated by the rock on which the ancient town stands; it has always been the heart of the archipelago. the old part of the town, a nice salon from the Umberto period with windows and balconies as delicate as lace, from which colored cascades of geraniums and delicate carnations descend. Typical dinner by fish dishes and return at the hotel.

3rd Day in the morning boat tour in circumnavigate the Lipari island. This tour is an absolute must, amid flows of obsidian and white expanses of pumice, materials with the same chemical composition, differing only in their state: the former glassy, spongy the other one, because of the sudden reduction of temperature in the magma in the final phase of eruptions. Between Canneto and Acquacalda, two nice maritime boroughs not yet ruined by mass tourism, along the sea, in the direction of Punta Castagna, lies the spectacular obsidian flow of the Rocce Rosse (Red Rocks). Between the Pomiciazzo gorge and Lami, a lunar  landscape heralds in the now inactive crater of Monte Chirica, beyond which the soft cliffs of Campobianco go down to the sea and into the crystalline waters off the Porticello beach. Likewise unrivalled are the panoramas that one can enjoy from the Quattrocchi heights towards the monumental Perciato cliffs, to the sides of which there are the picturesque "needles", beyond which the gaseous and sulphurous fumes of Vulcano. Coming back in Lipari with dinner and overnight.

4th Day Excursion to Vulcano  which still appears like in the world's prehistory, perennially fuming amid lava flows and mud bubbling with gas. The eruptive mouth rises to a height of 386 metres, where the big crater, which you can get to without too much difficulty and peril, raises its crest which dominates the western and eastern harbours, the Valley of Monsters and the profiles, gradually further and further away, of the other islands. Well worth a visit are the alum grottoes and the sulphur mines, where in the Bourbon epoch a population of damned people lived forced to extract the precious mineral. On the coast, in the north-western part of the island, there is the imposing Cavallo (horse) grotto, along the wild and half-deserted shore which slopes gently down to the sea with the black Gelso beaches over which there is an euphorbia scrub and twisted prickly pear plants. Places to visit: an hour excursion to the Gran Cratere through a path that climbs up to 400 m. where a breathtaking landscape can be admired. What is more there are even thermal waters of porto di Levante, the grotta del Cavallo or Eremita, the scoglio delle Sirene with its fine black sand and the valle dei Mostri of Vulcanello. Return to Lipari with dinner and overnight.

5 th Day Excursion to Salina one must not fail to visit Monte Porri and Monte Fossa delle Felci. On the latter, at almost 1000 metres above sea level, the ancient crater has been colonised by gigantic aquiline ferns which are added to the luxuriant vegetation of Salina, conferring on the latter an almost tropical look. Near Canna, sea beds rich in sponges and coral offer unexpected sights for those who love underwater photography. Another highly fascinating sight in the archipelago is the basalt rocks of Basiluzzo, Dattilo and Lisca Bianca facing Panarea, with which, as Strabo tells us, they once formed a single island, Evonimos, which a cataclysm split into the present ones. Monumental solitudes of this group of rocks near which, from imposing mouths of submerged hydrothermal vent, gurgling bubbles of gaseous vapors rise, which, in ancient times, were the scenario of probable worship of Hephaestus.

5th Day  Excursion to Panarea, situated on the Cala Junca cliff, Capo Milazzese, conserves intact the vestiges of a culture which here went on from 1440 to 1270 B.C., giving rise to a settlement of major archaeological interest. Inhabitants of Panarea are called "panarioti". They live in the main three centers such as: Pietro, Drauto, Ditella. The scenery, characterized by flourishing mediterranean vegetation, is rich in thermal springs and hydrothermal vent, in the sea marvellous and suggestive rocks emerge among them we remember: Basiluzzo, Dattilo, Lisca Nera and Lisca Bianca, Bottaro, Spinazzola and Formiche. Return to Lipari with dinner and overnight.

6 th Day Full day excursion to Stromboli which rises out of the water with the dry symmetry of its shapes perennially crowned by eruptive fumes. Its impervious Ginostra harbour is the smallest one in the world, while, beyond the fire zone, where moaning and hissing the lava touches the sea, the villages of Piscità, Ficogrande and Scari, open up, airy and white, gathered around the white mass of the San Vincenzo church. Beyond the very black glassy beach,  where there are reeds rising from the abysses of the Tyrrhenian, raises Strombolicchio, the primeval duct of the volcano, a fanciful natural sculpture in which fire, water and wind have left their eternal impress. Farewell dinner at the restaurant and overnight.

7 th Day Departure of guests to Milazzo by motorboat.

Quotation per person in Group or Individuals on Demand

The quotation will nclude 06 overnights in 3 superior stars hotel or 4 with dinners and overnights; all the excursions as in program with naturalistic guide: transfers by motorboat during excursions; packed lunches during the excursioons.

The quotation not include transfers from Milazzo/return, extras. 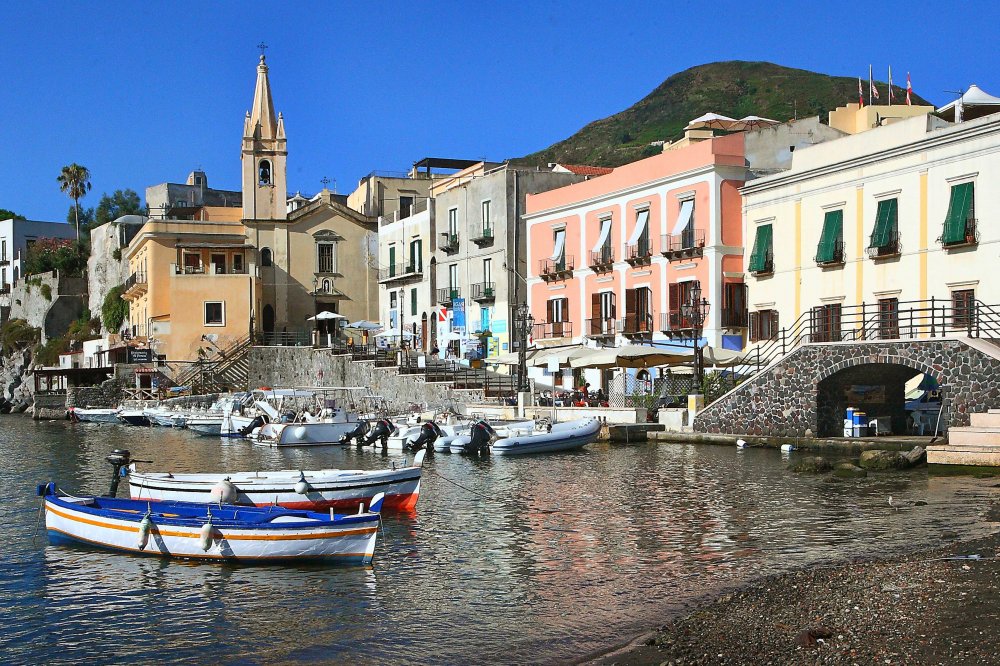