1st Day Arrival of the guests to Parma with guided tour of the principal monuments: the Duomo and Battistero Roman architecture and sculpture masterpiece, the most important and innovative monument of the medieval period in Italy. The tour will go on visiting the St. Giovanni Church, a baroque building with its cupola frescoed by the great painter Correggio. Then is scheduled the visit of  the Palazzo della Pilotta with a stop lunch nearby. In the afternoon timetable to accommodate at the hotel and in the evening typical “Parma” dinner at the restaurant  with welcome and overnight.

2nd Day in the morning guided tour to visit the Reggia di Colorno, nearby Parma a Renaissance, Baroque and Neoclassic palace. Some important restoration works were made after Ranuccio II Farnese's marriage with Princess Margherita Violante Savoy, who transformed the castle giving to it its present look. The plan was finished by their son, Francesco Farnese, thanks to architect Ferdinando Galli Bibiena's work. In 1807 it was declared "Imperial Palace" also when the dukedom, after the Congress of Vienna, was given to Napoleon's wife, Mary Louise of  Austria. At the end of the visit, transfer with stop lunch to the Magnani Rocca Masterpiece Collection in Mamiano, a beautiful villa with a permanent exhibition of paintings of 1800 and 1900 world artists. At the end of the visit, coming back in Parma with dinner and overnight at the hotel.

3rd Day Full day dedicated to Giuseppe Verdi, the master of Italian music and Opera. We will visit the birthplace and little house in Roncole in the countryside Po Valley. Then Busseto where Giuseppe Verdi memories are everywhere. He spent many years of his life in the Province of Parma composing some of his most important works. Stop lunch in Busseto. The tour ends at Villa Sant’Agata a gorgeous place with park and museum created in the nobles rooms where the Master spent the last years of his life. Coming back to Parma with free dinner and overnight.

4th Day in the morning guided tour in Fontanellato to visit the nice tiny town and the castle.  The Fortress dates back to the Middle Age, precisely to 1124 when he first defensive tower was built by the Pallavicinos. The walls were then erected, starting from the north squared turret, probably after 1386 by the Sanvitale who acquired the Castle from the Viscontis of Milan. The whole structure was completed only in the XVIth century with the construction of the first floor, adapted later as an apartment, operation which can be considered as the beginning of a definitive transformation of the Fortress from a defensive structure into a residential home.
Stop lunch in the surrounding and in the afternoon guided tour of the Torrechiara Castle. Set on a high perch overlooking the Parma valley, Torrechiara is one of the best preserved fortifications in whole the region. It was built between 1448 and 1460 by Pier Maria Rossi, who had it girded with a triple wall and four corner towers linked by battlemented parapets. Two loggias on the east side were added later. Inside, a fine square bailey abut on arcades and windows trimmed with elaborate Lombard style terracotta moldings. The most striking among the decorated rooms is the Camera d'oro (Golden Room), named after the pure gold that once trimmed the terracotta medallions set into the wall, whose fresco cycle dating to 1462 and attributed to Benedetto Bembo depicts a tale of courtly love and chivalry, recounting the story of Pier Maria Rossi's passion for Bianca Pellegrini. It also carries two entwined hearts and the initials of Bianca and Pier Maria joined by a ribbon bearing the motto “Nunc et semper”. The Camera d'Oro looks onto the deep loggia built in late 16th century, when the castle lost its defensive purpose and was transformed into a lordly manor. At the end of this guided sightseeing farewell dinner in the Felino Castle and coming back to Parma for overnight.

5th Day Leaving of guests  in scheduling departures or addiction tour or transfer in other destination on demand.

The quotation does not include transfers during the program, lunch 2 day; admittance in monuments and museums; extras. 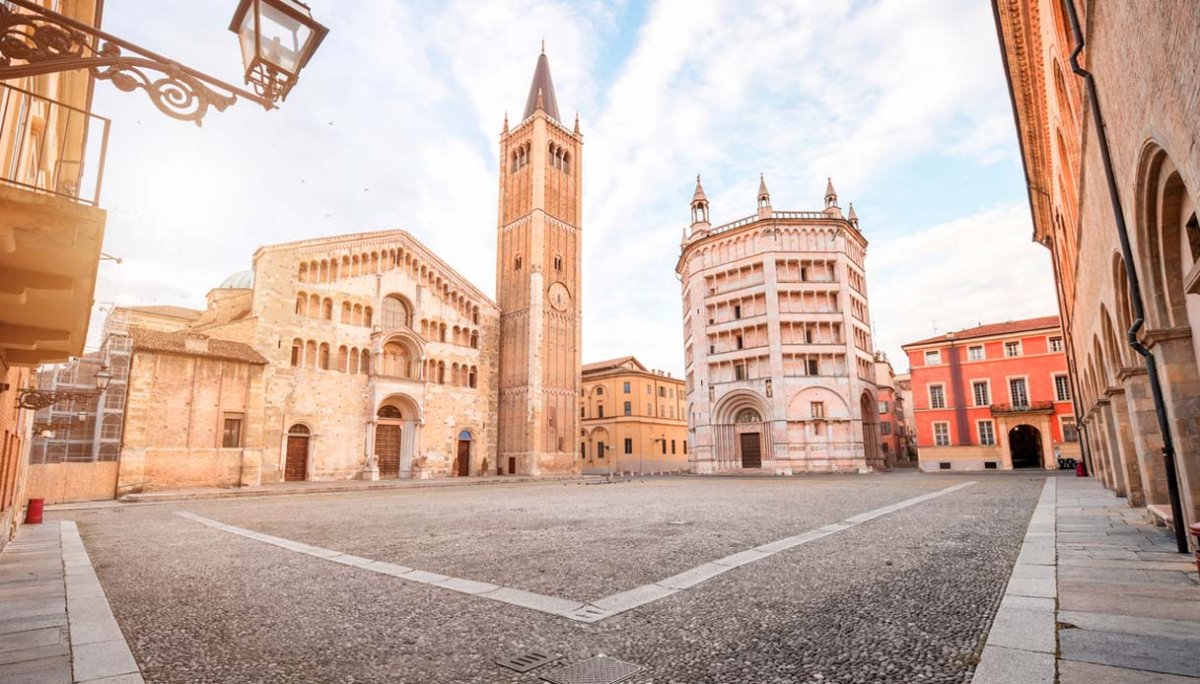